The first time I went to Chino-Bandido, I must admit, I was uneasy. The restaurant was relatively plain looking, the chair I sat in was somewhat uncomfortable, and there was a giant, and somewhat tacky, statue of a panda in a sombrero in the dining room. About 5 minutes after sitting down and ordering, my food was brought to me. I had ordered their jade red chicken with carnitas. And upon taking he first bite, the first words that emerged from my mouth were “Holy [explative].” 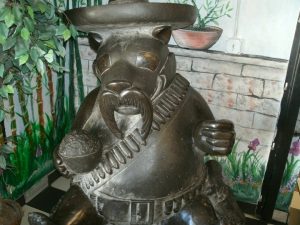 Courtesy of Dan Vs Food

Located on N 19th Ave near Greenway, the diner advertises itself as a mixture of Mexican and Chinese fusion restaurant. I admit, I am very hesitant when I hear the word “fusion.” Cultures have spent hundreds upon hundreds of years to create the tastes that they are known for. One shouldn’t just mix them together heedlessly, but this small unassuming restaurant actually manages to pull it off. Their dishes are packed with flavor that would make the likes of Panda Express jealous. According to them, their most popular dish is the jade red chicken which is a soft, deep fried chicken glazed with a delicious and somewhat spicy sweet sauce that is not too powerful to mask the flavor of the chicken, but is powerful enough to add a slightly spicy kick to the dish that will leave a lasting impression upon your taste buds.

As a bonus, rice bowls come with a free cookie. I highly recommend their freshly baked snickerdoodles that are probably loaded with enough sugar to make you wired for a few hours or so, but the taste is well worth it.

The downside to this place? It was recently featured on an episode of Guy Fieri’s “Diners, Drive-ins and Dives” so thanks to the mayor of flavor town, this place that used to be a local secret, is now one of the most popular diners in the area, so expect it to be crowded.