Dead-finitely A Show To Watch 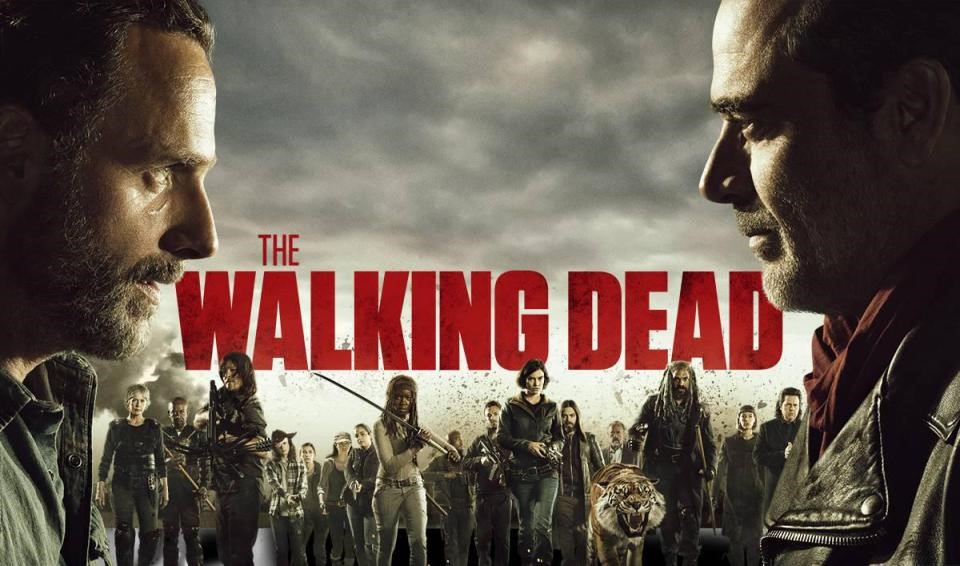 When you think of zombies I’m sure most, if not all, think of green colored flesh, dulcet-toned groans, narrowed arms reaching forward, and the accepted idea that brains is the only food of choice. Well, you’d be partially right.

I once pictured zombies, in the same way, that is before I came across a television show known as The Walking Dead. This AMC produced drama has given me a new outlook on the picturesque definition of the word zombie. If you’re at all squeamish, I’d suggest turning away for this next part. “Walkers”, as they are otherwise referred to within this show, aren’t your grandma’s run-of-the-mill classic zombies. They are gruesome. Think black to dark-green rotted flesh, hanging bowels, stripped bones, and a propensity to eat just about every living thing in sight.

If that description weren’t enough, now imagine hobbled walking, all too happy grabby hands and groaning sounds that I can only describe as someone having screamed themselves into a hoarse voice. This, my friends, is AMC’s The Walking Dead.

Now you’re probably wondering how they can make an entire television series about zombies? First off, let me just correct that misconception. This television show doesn’t just revolve around zombies, rather it revolves around the lives of people surviving in the aftermath that is the zombie apocalypse. The Walking Dead, surprisingly enough, is an adaptation of a graphic novel series of the same name, written by Robert Kirkman and illustrated by Tony Moore and Charlie Adlard. The show, however, was developed into a television series from the graphic novel by screenwriter and producer Frank Darabont, in collaboration with Robert Kirkman. Also, being it’s practically commonplace to have post-apocalyptic worlds within movies and television shows now, it’s not too surprising that a post-apocalyptic world about zombies would be created for our viewership.

The Walking Dead, as well as the graphic novel by the same name, centers around the character Rick Grimes, who after being in a coma sustained in a police shootout, wakes up to find himself in a world engulfed by “Walkers”. Now to clarify, this show is a loose adaptation of the graphic novel and does not follow the graphic novel’s storylines perfectly. Of course, the show doesn’t just follow Rick Grimes (played by Andrew Lincoln, Love Actually), but also follows his son Carl (Chandler Riggs, Keep Watching), Michonne (Danai Gurira, Black Panther), Maggie Rhee (Lauren Cohan, The Vampire Diaries), Carol Peletier (Melissa McBride, Walker, Texas Ranger), and Daryl Dixon (Norman Reedus, Ride with Norman Reedus) as they’ve fought, survived, and killed their way from Atlanta, Georgia to Washington, D.C. in the hopes of finding a cure to the zombie virus.*

*The show, over the course of eight seasons, has seen its allotment of zombie attacks, deaths, bad guys, and safe havens.

I’m glad that I stumbled across this television show a couple of years ago, as it has easily become one of my top favorite television shows. But, I also know that not everyone might feel the same way I do.

Sometimes the blood, guts, and gore of the show can be a bit much at times. But, for argument’s sake, let’s say that you don’t have an opinion about The Walking Dead, one way or another. So, if you’re still questioning whether or not this show is for you, then I urge you to continue reading as I try to persuade you that it is.

Do you like well-rounded, strong female characters in television shows? The Walking Dead is just one of several shows on television right now where the leading women are just as strong, emotionally complex, and badass, if not more so than the leading men.

You have the character Carol who’s had to overcome many obstacles within her life, and that’s without the added difficulties a zombie apocalypse brings. As a way of coping, Carol learns to adapt herself to every situation she’s put in. Because of this, she oddly becomes one of the show’s strongest characters, if not the deadliest. You also have Michonne, an already strong-willed character who learned to harden herself off from others after losing loved ones in the initial waves of the zombie apocalypse. But, over the show’s seasons, she has slowly opened herself up to those closest to her, and regard them as a family. Then you have the character Maggie Rhee, who’s been dealt many losses post-apocalypse. With so much loss you’d think she’d break down, but the losses have only come to make her a more able-bodied, determined individual.

If having well written female characters wasn’t enough, The Walking Dead isn’t without its fair share of action-packed scenes. You know it’s an action-packed show when almost every episode contains shootouts, explosions, and zombie hordes. Not only that, but you also get to see hand to hand combat scenes every now and again. The show’s special effects also assist in making the action sequences that much better.

I know that if you give this show a chance you will become just as emotionally invested in the characters, and the show itself, as I have. But, don’t feel you have to take my word for it. Just watch one episode, preferably the very first episode of the series, and you will see what I’m talking about. You might even find yourself addicted. You might just find yourself tuning in to watch it every Sunday. Who knows? You might even go as far as to consider yourself a lifelong fan of AMC’s The Walking Dead.

*The Walking Dead is currently in its eighth season at the time of this article’s publication.

Alex Horton
Alex Horton is a 28 year old Phoenix native, born and raised. After graduating with her Associates in Science from Phoenix College in 2010, she transferred to Arizona State University. There, she majored in biological sciences with an emphasis on animal physiology and behavior. The plan was always to become a Veterinarian. But, as with most life plans, they changed. Each day she found herself more passionate about writing and literature, and less about the sciences. So, she switched majors and, in the spring of 2014, graduated with her Bachelor's in English Literature. In her spare time, Alex loves to watch television religiously, write short stories and flash fiction, read YA and mystery novels, and watch gaming vids online. Furthermore, she is a part of the LGBTQ+ community, being an open and proud transwoman. She hopes to further her writing abilities, as well as her writing career.
Tagged: AMCThe Walking DeadTVWalkersZombies