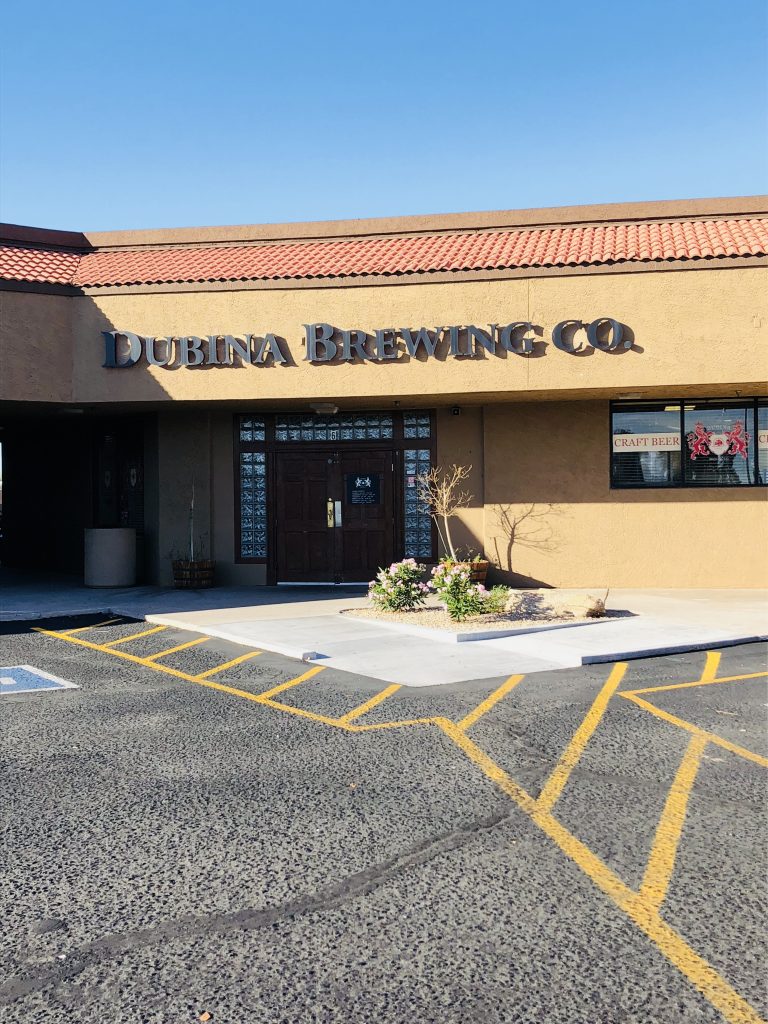 Dubina Brewing Company is a brewery in a strip plaza. Dubina Brewing Co. is a large room that has an open area with table scattered topped off by a horseshoe bar in the back. TV’s hang behind the bar to entertain the customers and the large fermenters are visible, being cleaned by the brewers. The kegs are stacked in front of the fermenters displayed as you walk in.

I ordered a flight of five beers to get a taste of the type of beers that Dubina Brewing has to offer. I wanted to start with something strong, so I chose their flagship beer, the Bell Road IPA, then the Blood Orange IPA, the Grandpa pilsner, the Boys in Blue Blueberry Wheat, and the Breech in Hall Vanilla Porter. These were five of the nine beers the Dubina Brewing brews. 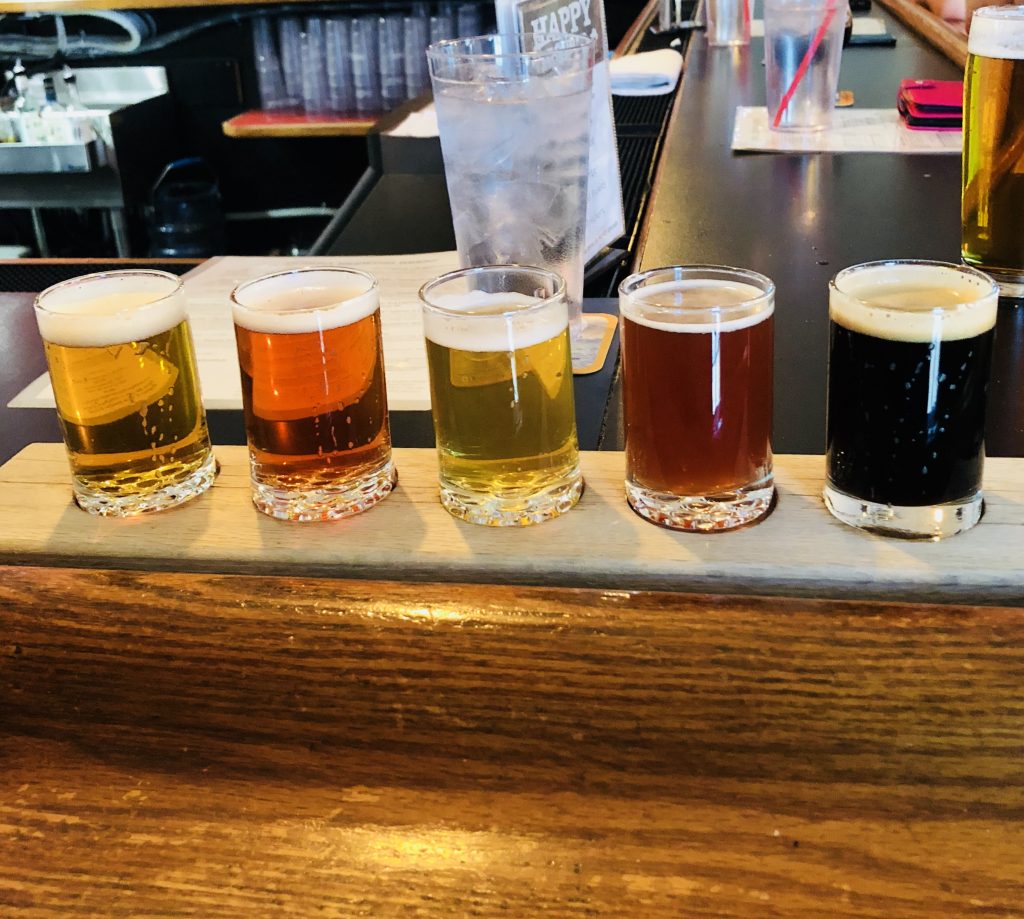 The Bell Road Ipa is the flagship beer that as the menu states it is “Dubina Brewing in a glass.” An IPA with a gentle hop residual, that is an easy drinker, yet bitter enough to make the IPA drinker happy. The orange and grapefruit from the hops shine there in the taste. I think the love of my IPA’s got the best of me here as I thoroughly enjoyed this IPA. I understand why it is highly sought out! 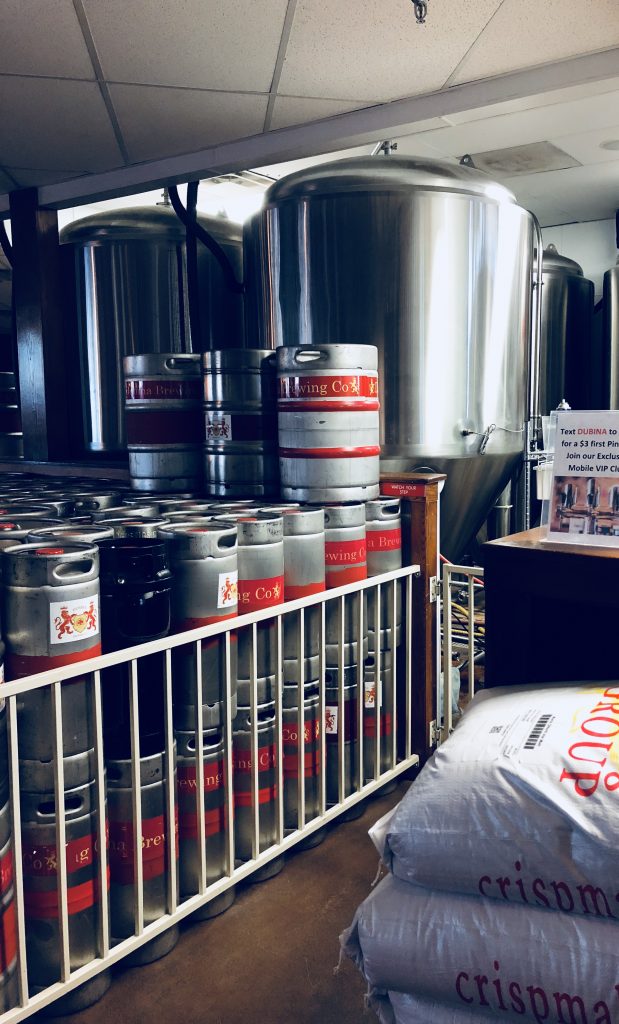 Outside of the flight, I ordered the Fall Maple Ale. My instant reaction from the aroma was that this is very sweet. It smelled like a bottle of maple syrup that I expected to be able to pour this on a stack of pancaked or waffles. The taste matches the aroma as well. I feel like I could eat pancakes and need no syrup as this beer would suffice. This is obviously low in IBU as this is not a hop forward beer but surprisingly high in ABV at 9.5% due to the sugars. This can be dangerous as I could easily drink this and not know how much it has affected me. Soon this will not be just a seasonal beer and will be added to the regular rotation.

Dubina Brewing CO. has great beer selection with knowledgeable bartenders that are courteous and can answer your questions about the beer itself, such as the hops and malt. There is a large variety of beer from the IPAs to the pilsner to the maple ale. Any type of beer drinker can find a beer that they will enjoy. Dubina is fantastic and a place I will frequent.

Craig Maddux
Craig Maddux was born in Phoenix, Arizona. He has a B.A. in English with an emphasis in Creative Writing and a minor in film and media studies from Arizona State University. Writing has been a passion of his since the time he was able to pick up a pencil. Outside of writing, Craig has recently found a new passion in brewing beer. He likes to call himself a "beer enthusiast," enjoying any type of beer thrown his way, with a preference of one of the many local craft brews that Phoenix has to offer. Craig can be seen around the Phoenix area watching his beloved ASU Sun Devils. Feel free to stop him and say hi if you see him around.
Tagged: BeerBell Road IPABlood Orange IPABoys in Blue Blueberry WheatBreech in Hall Vanilla PorterDubina Brewing