One of the staples of craft beer in Phoenix, San Tan Brewing, opened a second location this month in Phoenix, on 16th Street and Bethany Home Road. I had to check out this location, as San Tan is one of my favorite breweries that we have in Phoenix. It has played a critical role in the craft beer explosion in our state.  They do not brew beer at this location currently but they do serve their beer that has been brewed at their original location in Chandler.

This location is a stand-alone building, due to the beautiful weather, had all of their windows open giving the feeling that you are sitting on an outside deck. The floor is open and airy with TV’s hanging all around and the bar in the back left corner. The atmosphere was light with the heavy beer drinkers at the bar and the families sitting at the tables enjoying the food. The wait is nowhere near that of the original location and the open atmosphere gives it a less claustrophobic feel. 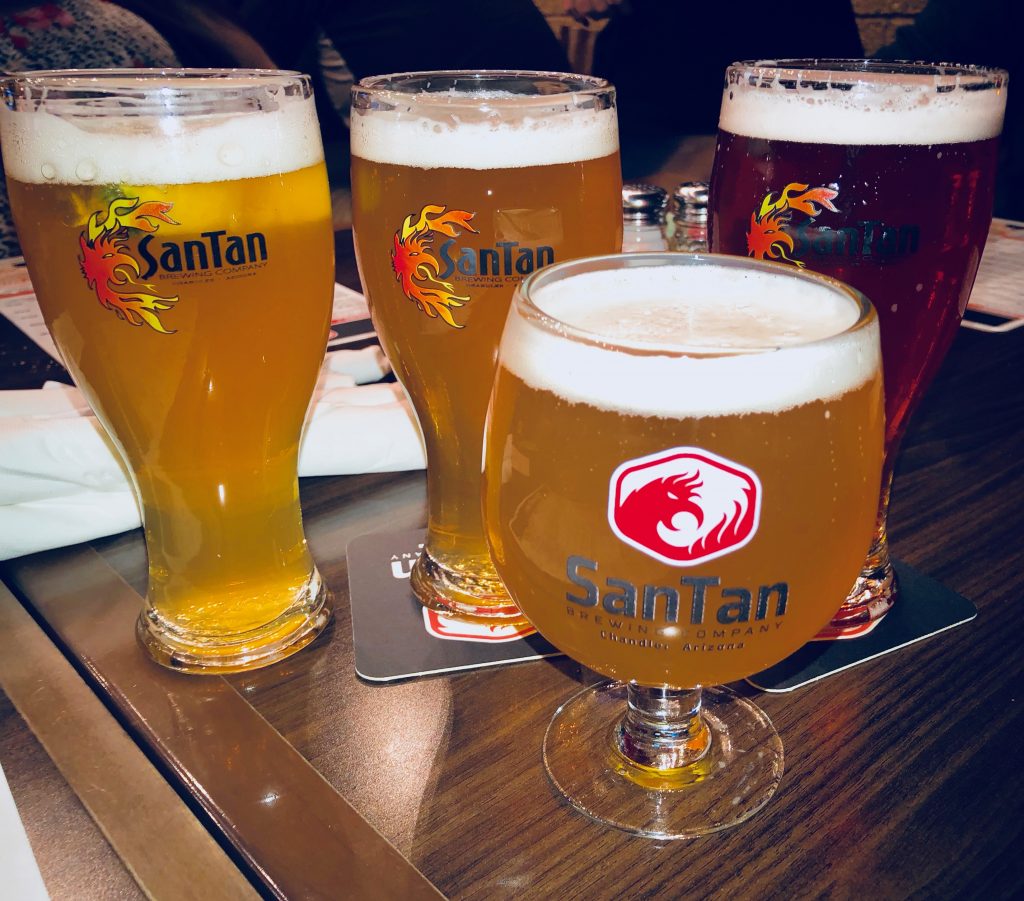 Since my fondness for San Tan is through the roof, I have tried many, if not all of their beers, prior to arriving I decided to not get a flight as I have at the previous breweries thus far.  They have their popular beers like Devil’s Pale Ale, the pineapple wheat, Mr. Pineapple, and the beautiful red brick colored Yotes Pale Ale on tap. MoonJuice Galactic I.P.A is one of my absolute favorites as the Australian grown Galaxy hops and New Zealand Nelson Sauvin hops give it a citrus and spicy flavor.

On the specialty beer list there was a variation of this beer brewed with grapefruit. I chose to try this and wow this was a great beer. The grapefruit was strong not only in aroma but as well in flavor. The grapefruit overpowers the hops being sweet yet bitter and much easier to drink than the original. If you are big I.P.A. fan like I am and love the hops flavors that shine through in I.P.A.’s this may be discouraging to hear but give it a shot, as you’ll be surprised at how good this beer is.

Since I was at the brewery itself, I decided I had to try a beer I had never had, nor seen. On the specialty beer list was Saison Barbera that is a collaboration with Dos Cabezas WineWorks. This is a Saison beer that was brewed with Barbera grapes. It was a deep red with the smell of grapes similar to wine. The grapes were strong in taste and this was very dry like a red wine. As I am not much of a wine drinker this was not quite my forte but it was good enough that I finished it.

This second location was worth the time even though the brewing does not happen at this site. I had a chance to enjoy San Tan’s beer from the tap. The specialty beers were a change from their original beer selection that can be found throughout the state at many locations. San Tan has done a great thing by moving their appeal further west so those not living in the east valley can also enjoy their beers. Take the time to stop and try this second location and enjoy one of the great breweries provided to us here in the valley.

Craig Maddux
Craig Maddux was born in Phoenix, Arizona. He has a B.A. in English with an emphasis in Creative Writing and a minor in film and media studies from Arizona State University. Writing has been a passion of his since the time he was able to pick up a pencil. Outside of writing, Craig has recently found a new passion in brewing beer. He likes to call himself a "beer enthusiast," enjoying any type of beer thrown his way, with a preference of one of the many local craft brews that Phoenix has to offer. Craig can be seen around the Phoenix area watching his beloved ASU Sun Devils. Feel free to stop him and say hi if you see him around.
Tagged: Beer