This Is A Show You Should Definitely Siren Up For 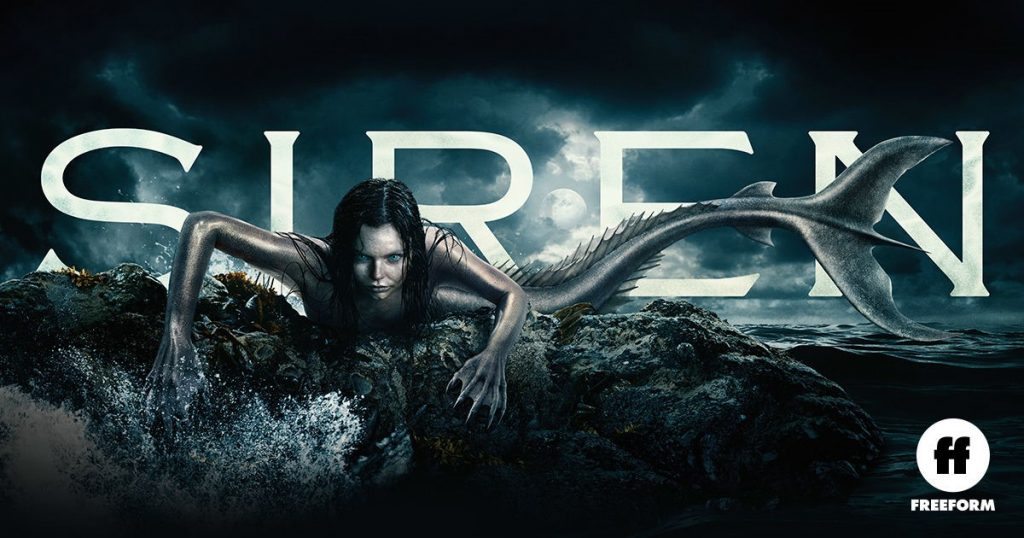 Besides being into superheroes as a kid, I was also into mermaids. I liked that mermaids could live on land, but that they also could live freely within the sea. I don’t know about any of you guys, but I enjoyed the lore of mythological creatures like mermaids. It also does not hurt that mermaids were depicted in movies and television as beautiful marine creatures with long flowing hair and wonderful singing voices.

With that, I have noticed that an abundance of movies and TV shows tend to stick to this typical characterization of mermaids: beautiful, friendly, and with bewitching singing voices. But, what if mermaids were portrayed differently? What if mermaids were seen as predatory creatures, rather than benevolent ones? Well, I came across a new fantasy drama that does just that. This show being Freeform’s Siren.

This fantasy drama was created by screenwriter Eric Wald and producer Dean White. Siren was ordered for a ten-episode first season and premiered on March 21. Siren follows Marine Biologists Ben Pownall (played by Alex Roe, Forever My Girl) and Maddie Bishop (played by Fola Evans-Akingbola, Death in Paradise) as they assist Ryn (played by Eline Powell, Game of Thrones), a mermaid they’ve come across, in finding her mermaid sister. Given the show’s title, it’s evident the show’s creators want to dispel the common and overused depictions of mermaids.

Sirens were shown as bird-like creatures with the heads of human women that would sing to lure in sailors to eat them. In Siren, they are taking the predatory notion of Sirens and combining it with another mythological creature, mermaids. The mermaids within this fantasy drama are shown with stone grey scales, sharp-clawed webbed hands, long spiked fluked tales, and long sharp conical teeth. If that weren’t menacing enough, the mermaids can shapeshift into humans on land, while also retaining their predatory abilities.

Just in case you’re wondering, this show uses CGI along with special effects makeup when showcasing the mermaids. CGI is seamlessly used when demonstrating the mermaids’ swimming and feeding abilities underwater. The special effects makeup is used when having to physically portray the actors as mermaids. This means that makeup and prosthetics are primarily used when depicting mermaid scales, eye colors, hand webbing, and other mermaid attributes, whether in mermaid or human form.

It should be noted that like the special effects, the show’s writing is also well done. Being only four episodes of this show have aired, the writers are great at constructing people with multiple facets. Each episode gives a glimpse into each character’s workings, hardships, and desires. In such a short amount of time, I’ve found myself being emotionally invested in the show’s diverse characters. I know that as the season continues, the characters will only become better well-rounded.

Do you enjoy shows with good characterization and special effects? Are you also looking for a show with a twist on mythological creatures? Then this show is for you as it has them. This show takes a different spin on the classic mermaid concept. I know that if you give it a chance you’ll become just as hooked on this show as I am. This is why I highly recommend you watch Freeform’s Siren.

Alex Horton
Alex Horton is a 28 year old Phoenix native, born and raised. After graduating with her Associates in Science from Phoenix College in 2010, she transferred to Arizona State University. There, she majored in biological sciences with an emphasis on animal physiology and behavior. The plan was always to become a Veterinarian. But, as with most life plans, they changed. Each day she found herself more passionate about writing and literature, and less about the sciences. So, she switched majors and, in the spring of 2014, graduated with her Bachelor's in English Literature. In her spare time, Alex loves to watch television religiously, write short stories and flash fiction, read YA and mystery novels, and watch gaming vids online. Furthermore, she is a part of the LGBTQ+ community, being an open and proud transwoman. She hopes to further her writing abilities, as well as her writing career.
Tagged: Alex RoeEline PowellFola Evans-AkingbolaFreeformMermaidsSirens