Making a movie is hard. Making a good movie? That’s really hard. Making a good mystery? These days that appears to be damn near impossible, given the relative scarcity of mysteries. Horror movies, superhero flicks, action, and dramas are all doing well in theaters and multiplexes. A good old whodunit? They’re a rare breed. 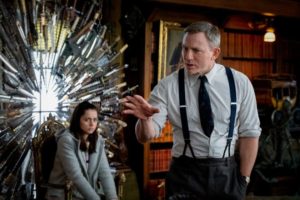 But why? Is it because, as a society, we’re dumber? I imagine that some people of a certain age would sneeringly point to Millennials and the rise of social media and claim their attention spans have been irrevocably damaged.* Yet the average American reads somewhere in the neighborhood of a dozen books per year, and I would imagine that a good chunk of those are mystery novels.

I don’t think it’s that we’ve gotten less intelligent. Instead, it’s due to the rise of the four-quadrant film and a greater focus upon international audiences. Four-quadrant films are designed to attract the interest of people under 25, people over 25, women, and men. To do that, they feature plots that can cross cultural barriers with ease.** Studios also believe that complicated plots are a turn-off to international audiences. Is that racist? Yeah, probably.

Once in a while, a good mystery isn’t released so much as it escapes. When that happens, my heart leaps. I thoroughly enjoy a cast of entertaining scumbags, a needlessly complex homicide, and a sleuth that delights in making everyone else feel inadequate. Rian Johnson followed up the very good Star Wars: The Last Jedi with something even better, the snide whodunit Knives Out, and we are all the better for it.

Why would someone commit murder? The extravagantly named crime novelist Harlan Thrombey (Christopher Plummer) made a career out of that question. He’s a best-selling mystery novelist, and his success has earned him a $60 million fortune and a sprawling mansion. You’d think that he’s living on easy street, spending his days with a loving family, right?

Not so much! In point of fact, his immediate family is…not awesome. They are:

To one degree or another, all of these people are leeching off of Harlan. With a family like that, you can see why he needs a friend, and her name is Marta (Ana de Armas). Originally hired to be Harlan’s nurse, the two of them formed a deep friendship. Despite not knowing if she’s from Cuba, Ecuador, Paraguay, Uruguay, Brazil, or somewhere else south of the border, the Thrombeys tell Marta she’s part of the family.

Things get complicated when Harlan turns up dead. He may have killed himself, but questions remain. The good news is that Detective-Lieutenant Elliott is on the case, and he’s brought help. Consulting detective Benoit Blanc (Daniel Craig) has been hired to assess the situation and determine if foul play was involved. Did Harlan commit suicide or was he slain? If he was killed, who stood to gain the most?

Many people first became aware of Rian Johnson upon the release of the wildly controversial The Last Jedi. That’s a shame, because, at his core, Johnson isn’t a Star Wars guy. He’s a crime/mystery guy, and a filmography consisting of Brick, Looper, The Brothers Bloom, and three outstanding episodes of Breaking Bad bears that out. That’s where his heart is, and that’s where he soars as a director. 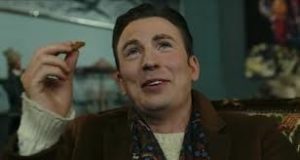 While Knives Out might not be the best movie of the year, it’s absolutely the best edited and perhaps the best directed. The film drips with ingenuity, and you can feel Johnson’s passion for the mystery genre. The majority of the film takes place in a big old house that could be in the same neighborhood as the mansion from Clue. Without telegraphing it, Johnson gives us a tour of the place so we’re comfortable with the geography and know who is where on the night in question. His pacing is gleeful, and considering he’s working in a genre that depends on massive exposition dumps, it never feels like the film slams on the brakes to explain things. Plus, it has one hell of a final shot.

Johnson’s screenplay is clever—perhaps a little too clever. He’s primarily concerned with entertaining us, and he’s made a crowd-pleaser from top to bottom. The script crackles with one-liners, and he does a nice job of sketching the characters and showing us how they relate to each other. He also plays exceptionally fair in terms of laying out the clues ahead of time, so that when the mystery is revealed, all the pieces lock into place tightly. It’s been said that all art is political, and that’s especially true here. Johnson takes shots at goofy proto-hippies, the alt-right, and a certain orange-hued chief executive. He’s making valid points about how the politics of the 2016 election have seeped into our daily lives, and how the real problem isn’t right versus left, but actually rich versus poor.

The ensemble is ridiculously entertaining, and while some members of the cast have more time onscreen than others, everyone gets a moment to shine. After several years playing Captain America, you can feel Chris Evans’ enthusiasm toward playing the loutish Ransom. Similarly, Toni Collette is having an absolute blast as self-help guru Joni, and Jamie Lee Curtis positively oozes privilege as elder daughter Linda.

However, there are two performances that slightly stand out from the rest. On the flamboyant side of things is Daniel Craig as Benoit Blanc. His Southern accent is referred to as “CSI-KFC,” but Craig is really playing an American version of Hercule Poirot. He condescendingly sifts through the clues and triumphantly exposes the truth, and you can hear the enthusiasm in his voice as he puts the pieces together. Leaning more naturalistic is Ana de Armas as Marta. She’s playing a comparative rarity in this genre; a genuinely good person. If character is entirely based upon the choices made, then de Armas excels at showing us who Marta truly is. She’s a woman determined to do the right thing, even though her decisions might land her in deep trouble. Her performance is also highly amusing in that, if Marta attempts to lie, she’ll vomit explosively.

A quality film doesn’t have to be a downer. I absolutely adored The Irishman, but I can’t imagine giving it a watch to cheer myself up. Knives Out, on the other hand, is a sure-fire depression killer. It remains to be seen if it revitalizes the mystery genre. While I’d like more whodunits, I’m grateful we have a film made with such skill and intelligence that’s also an awesome time at the movies.

*While there might be something to this, keep in mind that the Boomers made Mr. Ed, a sitcom about a talking horse, a gigantic hit.

Tim Brennan
Tim has been alarmingly enthusiastic about movies ever since childhood. He grew up in Boulder and, foolishly, left Colorado to study Communications in Washington State. Making matters worse, he moved to Connecticut after meeting his too-good-for-him wife. Drawn by the Rockies and a mild climate, he triumphantly returned and settled down back in Boulder County. He's written numerous screenplays, loves hiking, and embarrassed himself in front of Samuel L. Jackson. True story.
Tagged: ana de armaschris evanschristopher plummerdaniel craigdon johnsonjamie lee curtisknives outmichael shannonrian johnsontoni collette