I chose to go to Mother Bunch Brewing, simply because the name reminds me of the band Mother Love Bone, this week to indulge in their craft beer. Approaching this old brick building attached to a Cheeba Hut I didn’t know what to expect, from a sports bar type feel to a hipster run establishment. Inside it was neither. 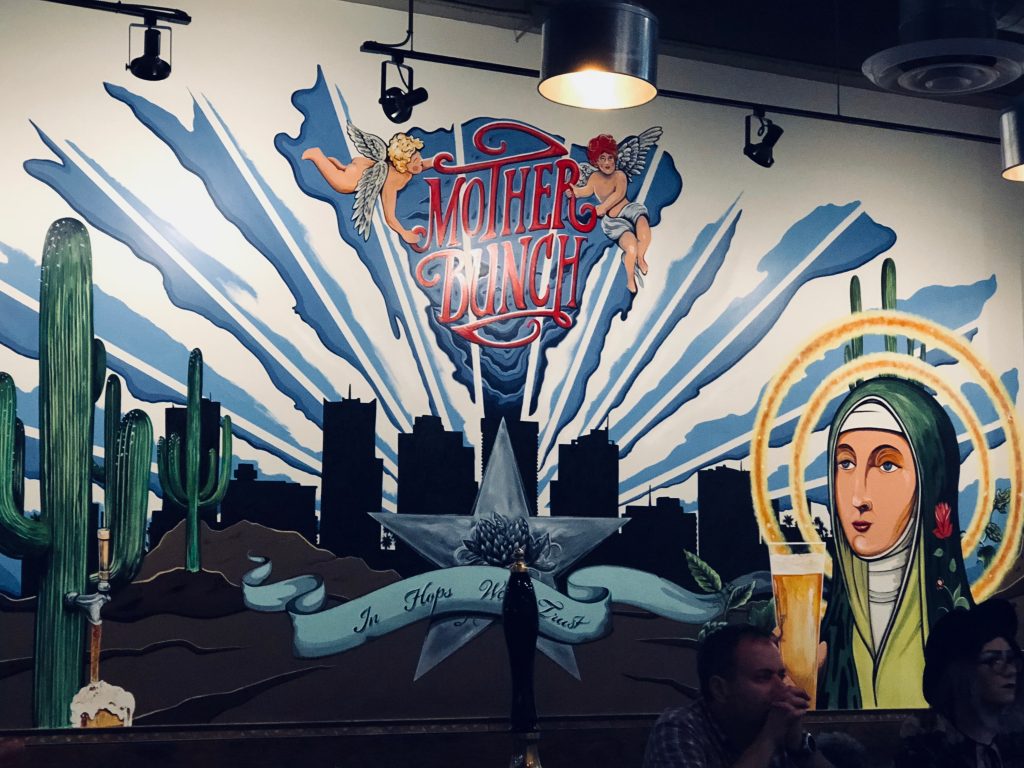 One wall displayed a mural painted with Mother Bunch held up by two angels and the words “In hops, we trust” in front of a star and rays over the Phoenix skyline, other walls had canvas paintings hanging to decorate them.

I took a seat at the bar to get a view of the games on the TV and the wall-sized chalkboard with the beers listed; I was ready to indulge in beer.  A food menu was also available and what goes better with a good beer and a basketball game then food?  To get a feel for what their beers have to offer I chose to get a flight.

They have a wide variety of beers, 20 to be exact. Each beer on their menu was numbered from one to twenty, and in front of each beer slot on the wooden flight slab, you write the beer you wanted in chalk. From the 20 beers I got to choose four beers to taste to be part of the flight, and this was not an easy decision. Do I choose a variety of IPA’s or a mix of a stout, a Saison or wheat? With so many choices I decided to go with the intriguing-sounding milkshake I.P.A. called “I’m a Cool Mom” and a stout called “Your Mom’s Chesthair” in reference to the movie Mean Girls. I also chose Mother Bunch’s west coast I.P.A and an Irish Red. 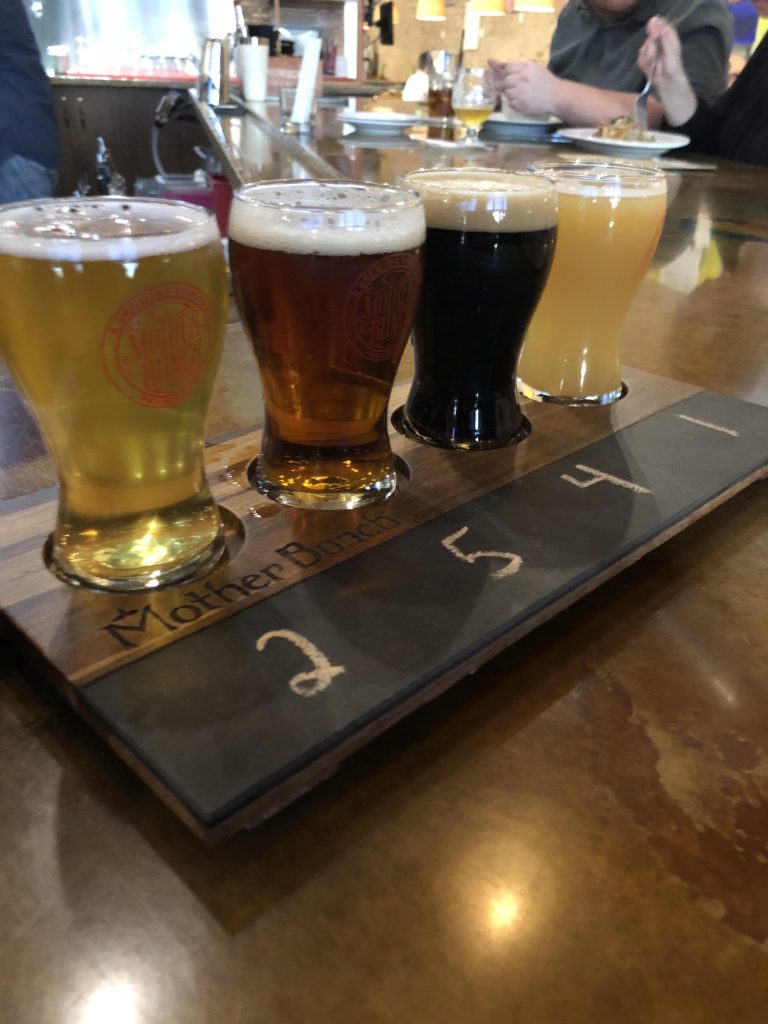 Each of their beers was good. The Irish Red was a dark amber color that had a nice hop flavor but was not overwhelmingly bitter. The west coast IPA was golden in color and the most bitter of the beers on the flight. The hops shined through the light malt and kicked you in the mouth. The beer that stood out to me was the milkshake IPA. It is a hazy light orange color that has an aroma of citrus and a smooth sweet flavor that makes this easy to drink as the hops hit you afterward. As I am surprisingly learning that I am beginning to have a soft spot for stouts as I liked their “Your Mom’s Chesthair” stout that was sweet with a full mouth flavor, leaving a chocolate taste sitting on the back of your tongue.

After enjoying the food and beer, I would visit again, as the staff was very friendly and courteous, and there is always a relaxed atmosphere and good drinks to draw me back. Mother Bunch has a feel of a restaurant more than a tasting room, which may appeal to more than just beer geeks. Visit them just south of the I-10 and 7th St.

Craig Maddux
Craig Maddux was born in Phoenix, Arizona. He has a B.A. in English with an emphasis in Creative Writing and a minor in film and media studies from Arizona State University. Writing has been a passion of his since the time he was able to pick up a pencil. Outside of writing, Craig has recently found a new passion in brewing beer. He likes to call himself a "beer enthusiast," enjoying any type of beer thrown his way, with a preference of one of the many local craft brews that Phoenix has to offer. Craig can be seen around the Phoenix area watching his beloved ASU Sun Devils. Feel free to stop him and say hi if you see him around.
Tagged: ArizonaBarsCraft BeerMother Bunch BrewingPhoenix