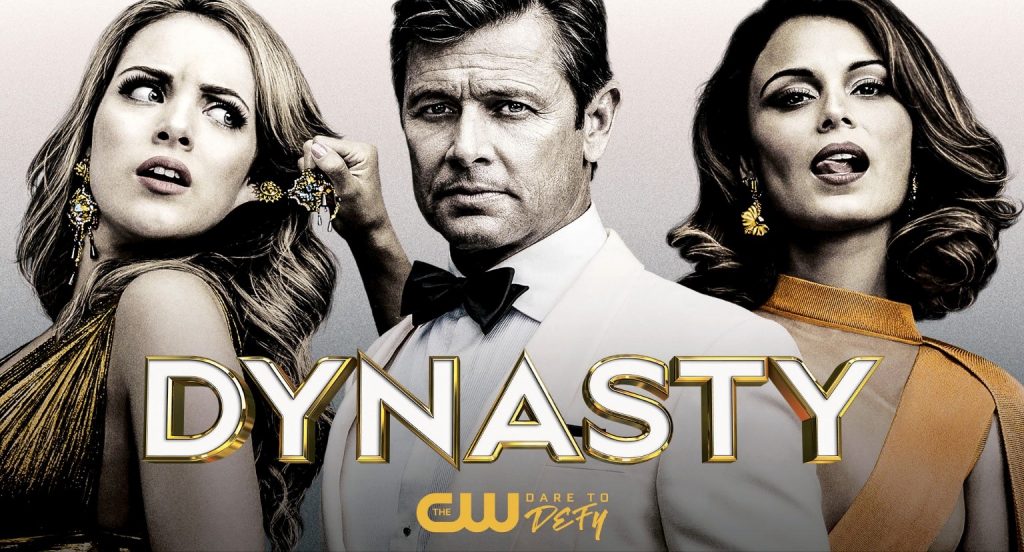 When it comes to television these days, a reboot is a definitive word. Many networks are cashing in on this not so new concept of recreating shows or deciding to continue shows that have ended. This is because reboots can attract new audiences and fans. However, recreating or continuing a show does not necessarily mean the show will be a good one.

Luckily for you, I have a reboot I think is a cut above the rest. This is The CW’s Dynasty.

This primetime drama was developed by screenwriters/TV producers Sallie Patrick (works include Revenge and Limitless), Stephanie Savage (works include Gossip Girl and Runaways), and Josh Schwartz (works include The O.C. and Hart of Dixie), and is based on the original ‘80s drama Dynasty created by Richard and Esther Shapiro. Dynasty premiered October 11, 2017, and just had its season one finale on May 11, 2018. The CW renewed the show for a second season on April 2, 2018.

Now I have not seen the original Dynasty series, and you are not required to have knowledge of the original in order to enjoy this CW reboot. There are differences from the ‘80s series, with this reboot having a new location setting, character gender changes, and including more diversity. But, whether or not you have seen the original series, you will be able to appreciate how the developers of this show have made it their own. I find that this Dynasty reboot is easily capable of being a standalone series.

Dynasty also has great writing. The writers are wonderful at taking classic characters and making them new and fresh. Their characters are in-depth, complex, and multi-faceted. You have Blake Carrington, patriarch of The Carrington family and CEO of Carrington Atlantic, who is arrogant, guarded and calculating. But, he also cares deeply for his family.

You also have Fallon Carrington who, like her father, is guarded and calculating, as well as strong and independent. Because of her childhood, she hides behind these qualities to keep from being hurt and vulnerable. Steven Carrington is openly gay, and unlike his father and sister, is caring and sensible. But he can also be calculating and secretive when pushed.

Then there is Cristal Flores Carrington and Sammy Jo. Both characters are strong-willed, independent individuals with dark pasts. They differ in that Cristal is nurturing and caring, where Sammy Jo is a bit self-centered. They both help The Carrington family to grow as people. The writers, as well as the actors, are great at making these characters come to life.

Like the original series, this Dynasty reboot has a lot of drama. I find that this show has a soap opera-esque feel to it. The show contains fights, boardroom shakeups, family squabbles, and more. If you enjoy shows that involve tons of drama, this show definitely has it.

With reboots being the latest trend, it is nice to see one that is able to stand fresh and independent of its original series. This show has it all: great writing, characters, and drama. I know that you will love this show, whether you have seen the original series or not. This is why I encourage you to watch The CW’s Dynasty reboot.

Alex Horton
Alex Horton is a 28 year old Phoenix native, born and raised. After graduating with her Associates in Science from Phoenix College in 2010, she transferred to Arizona State University. There, she majored in biological sciences with an emphasis on animal physiology and behavior. The plan was always to become a Veterinarian. But, as with most life plans, they changed. Each day she found herself more passionate about writing and literature, and less about the sciences. So, she switched majors and, in the spring of 2014, graduated with her Bachelor's in English Literature. In her spare time, Alex loves to watch television religiously, write short stories and flash fiction, read YA and mystery novels, and watch gaming vids online. Furthermore, she is a part of the LGBTQ+ community, being an open and proud transwoman. She hopes to further her writing abilities, as well as her writing career.
Tagged: DramaDynastyEsther ShapiroRichard ShapiroThe CW